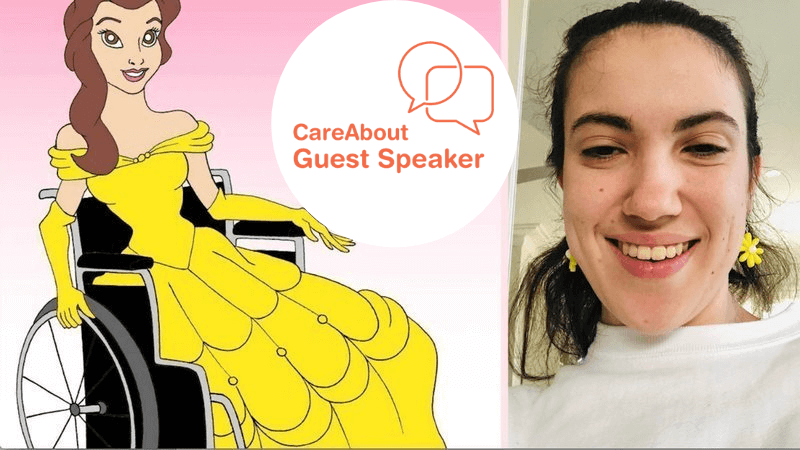 We were incredibly grateful to sit down with Hannah Diviney, who is a disability advocate and writer. Her recent petition on Change.org implores Disney to create a princess with disability so that she and others in the disability community feel that they have representation in the world.

Hannah is only 21 years old, yet speaks with the insight and wisdom of someone many years her senior. She has a fantastic ability to put into words what many find so difficult to articulate when she speaks about the impact of a lack of onscreen representation of people with disability.

For people with disability, and in particular children with disability, there is a very real absence of tangible role models; of people who look, think and feel like them. This has had a significant impact on Hannah, who says that growing up she felt invisible and worried that she wasn’t actually real. In a previous interview Hannah says that there was a time when she was too scared to look into a mirror in case she disappeared or wasn’t there at all.

Petition for a Disney princess with disabilities

Disney movies are recognised for teaching children about wonder, magic, having dreams and morals, yet for Hannah and many other children with disability, there isn’t a single character in these movies that they can relate to.

Hannah grew up looking for representation of some kind yet not seeing herself reflected in anything that she watched, read or played with. She was always fascinated by stories and has wanted to be a writer since she was four years old. But being unable to find any form of representation created a feeling of invisibility that she says has been very hard to shake.

It’s a feeling of being valued less, which isn’t a nice thing to grow up with.

Finding nobody who looked or felt like she did, meant that she often wondered if there was a future for her, or hope, or if she even existed at all.

After seeing Pixar’s movie, Inside Out, which Hannah thought was a fantastic way to tackle mental health issues in a way that kids would understand and not feel scared or confronted by it, she began thinking about Disney approaching disability in a similar way.

If Disney could take that step to talk about and represent mental health successfully then maybe it wasn’t so far out of the realm of possibility that they could also create a disabled character.

So, in 2015, she wrote an open letter to Disney imploring them to create a princess or a hero who was in a wheelchair yet had all the same hopes and dreams as their many able-bodied characters. Disney did not respond.

As happens in life, Hannah became busy with school and university studies and while the idea behind her letter was always in the back of her mind, it didn’t take centre stage until a few years later.

Turning the open letter into a viral petition

As Hannah started developing a bit more of a profile through her writing and advocacy in the disability community, she started to revisit the disabled Disney princess idea.

Hannah’s choice of a Disney princess was a truly strategic one; she says:

“I noticed that when you think of, or ask a little kid about Disney, their answer will be related to the princesses; they’re the ones who you see on the lunchboxes, costumes, t-shirts, toys, books, birthday party themes, viral videos singing Frozen songs…

So, if this is my target, it’s going to have the most impact and reach for the kids who are watching – whether that be disabled kids themselves, or able-bodied kids. It works twofold: it gives disabled kids the opportunity to see themselves at the centre of a story, as the hero, they won’t feel so invisible. They’ll see themselves having adventures, having friends, falling in love.

And on the other hand, able bodied kids can see that disabled kids aren’t someone to be unsure of, or wary around. A Disney princess would be a great tool for creating awareness, empathy and understanding.”

The timing of the petition was also planned. When Australian pop icon, Sia, released her film depicting someone with autism, she was criticised for mis-representation. Instead of responding to critics with humility, Sia lashed out leading to further criticism and sparking broad discussions. Her film was nominated for a Golden Globe despite her depiction being harmful to the autism and disability community. The publicity and commentary around the lack of authentic representation was the catalyst for Hannah to launch her Disney petition, taking advantage of the window of opportunity.

Her petition launched on December 3rd – International Day of Disability, on change.org. Again, a strategic decision, as this is a day where conversations about disability are likely to be at the forefront.

That’s how things work these days – they centralise issues and confine them to a single day where everyone can be seen to jump on board…and then they are forgotten about and fade back out of everybody’s consciousness.

Hannah, regarding International Day of Disability

Hannah felt great! Until her joy was tempered when she saw an episode where Artie was dreaming and he was up walking around and dancing. She then realised that the actor was in fact an able bodied person and just pretending to have a disability. She says it was a real kick in the teeth.

Ohhh, this is just a role he’s playing…he can take this costume off at the end of the day. He actually has no idea what my life is like, or what it feels like to be me. It’s just something he can cast on and off when the Director yells ‘cut’.

As Hannah got older and into her teen years, she noticed that this was the case for most disabled characters. They were just able-bodied actors pretending to be disabled.

She also started to notice that if you were an actor and wanted accolades and awards, playing a disabled character was almost a guaranteed pathway to that goal.

The physical and emotional transformation that it takes to play someone who is part of our community is something that the critics and voters love. I’m like, hang on, why isn’t the disabled actor getting these roles and winning the Oscars?

Onscreen misrepresentation of people with disability

Filmmakers are often not doing their due diligence and the disabled characters they portray are frequently done so poorly.

I mean, we’re not scary. We’re not gonna bite you! But we are going to bite you if you ignore the opportunity to consult with us and instead just go ahead and do it and mess it up.

Sometimes the right questions aren’t being asked and the disability community is not being consulted due to a fear of offending, an embarrassment of not already knowing or simple narcissism and disrespect.

Either way, Hannah feels that disabled characters in movies and TV are often not truly representative and are instead the able-bodied person’s idea of what it means to be disabled.

She thinks that the hesitancy to consult her community could also come from social media and internet culture – that we now live in an age where we are afraid to admit that we don’t know something, so we strive ahead and speak out on issues anyway, then face backlash because we didn’t get it right. It would’ve been so much easier and better to just say ‘I don’t know what I’m doing, I need help. Educate me’.

What does Hannah recommend?

“If I was going to work on a project where I was writing about a person of another race, for example, I would do my due diligence and make sure the stuff I had my character doing and the stuff I had my character saying, wasn’t going to cause offense. I’d make sure that I wasn’t perpetuating stereotypes. I would have researched and spoken with that community to ensure I represented them properly and didn’t do anything that might cause harm to anybody.”

She says that, it’s really just your basic obligation to respect humans who live differently to you. Hannah hopes that this is standard and is the approach that is taken, that consultancy is something that all films undertake and take into account.

“If they came to me and said ‘we really need your help because we don’t know how to do this, and we don’t want to get it wrong’, I would be ecstatic. I would much prefer it if a production company came to my community and said, ‘hey we have no idea what we’re doing, can you help us?’. That is much more preferable than them thinking they know what they’re doing and falling short.”

It’s okay not to know things. You can learn.

Speak to our Care Advisers today
CALL TODAY - 1300 721 855
Next available Thursday 9:00am AEST
Your guide to NDIS terms and acronyms
Download this free guide to help you better understand the NDIS.