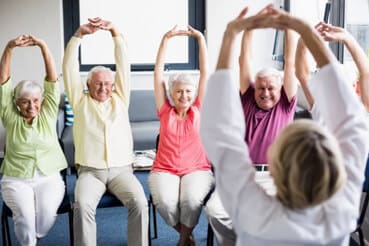 We all know that keeping active is good for our overall health – it can keep our heart happy, our mind clear and our muscles and joints strong. But, did you know that certain types of exercise can actually cause our brain’s white matter to remodel itself?

The white matter of the brain contains the nerve fibres – they are the tail-like projections of the nerve cells, and create a connected network that sends the brain’s messages throughout the body and receives messages coming back from the body. It’s pretty important stuff! It’s also the area of the brain that is commonly affected in people who have dementia. People with more advanced dementia generally have more advanced changes to their brain’s white matter.

A recent study explored the relationship between walking, dancing and brain health and discovered some astonishing results! The study found that people who were physically active were actually able to restore and regenerate their white matter. Yet the white matter of those who were inactive continued to shrink and become frayed.

Until fairly recently, it was believed that humans are born with a certain number of brain cells which continue to diminish over time, leading to a continuous decline in brain health and function – and there was nothing you could do about it! It’s very exciting to find that this theory isn’t correct and that you can in fact generate and grow new brain cells in response to changes in lifestyle.

The study brought together a large group of healthy but inactive adults (aged 60-79) and split them into three smaller groups; a group of walkers, a group of dancers, and a third group who made no changes to their lifestyle and remained inactive.

The group who remained inactive saw the opposite, with a declining size in white matter and more fraying of the nerve cells.

How active do I need to be?

A few lively walks a week is all you need! The group of walkers in this study went on a brisk walk 3 times a week, with each walk lasting around 40 minutes. They did this for 6 months and were then re-observed, having MRI scans on their brains and undertaking memory tests.

The MRI scans revealed that overall, this group’s white matter had grown and was much healthier compared to their results at the beginning of the study. Their memory and cognitive test results had also improved compared to their initial test and to the other two groups.