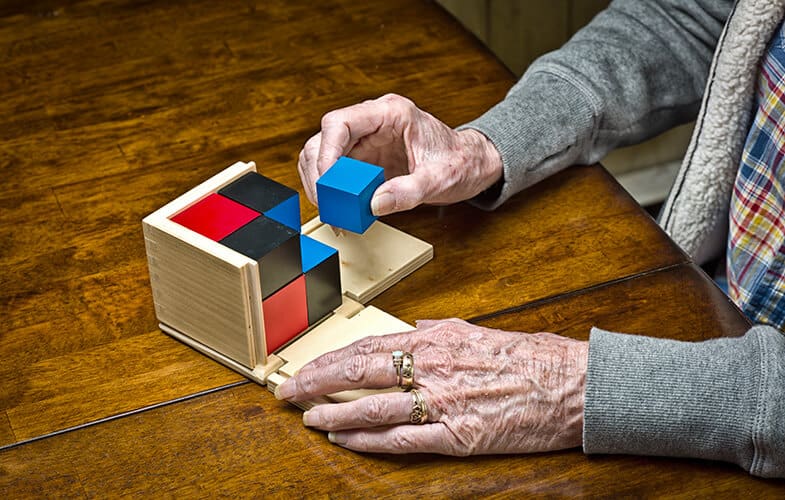 Dementia is not a specific condition or disease. It is a term that is used to describe a range of symptoms associated with loss of memory, thinking skills and behaviour skills that significantly reduce a person’s ability to perform everyday activities.

Dementia is caused by damage to brain cells. As a result, brain cells have difficulty communicating with each other. The type of dementia that a person has depends on which cells have been damaged.

Frequent memory loss is one of the most common signs of dementia. It is short-term memory loss that is the one to look out for; everyone forgets things that happened a long time ago. Forgetting appointments and dates, forgetting where they put particular items, forgetting why they are in a particular room, and needing information repeated several times are common memory-associated symptoms of dementia.

2. Lack of clarity in communication and language

People with dementia may have difficulties following and participating in a conversation. When expressing themselves they may lose track in the middle of a sentence, repeat themselves or use the wrong word by which to call something. They may also appear to go off topic.

Another common sign of dementia is a lack of focus, particularly in seeing through tasks from beginning to end. This applies not only to new, complex tasks, but simple and familiar tasks such as preparing a meal or looking up something on a computer.

Confusion can take many forms, such as not knowing why one is in a particular place, mixing up times or days, not immediately recognising faces of people they know, or even remembering the rules to a game they have played many times.

Personality and mood changes can take several forms. Some people have a short fuse that is easily triggered; others may become suspicious, depressed or anxious. Because dementia can affect judgement, it is not uncommon for some people to become uninhibited or more outgoing.

Loss of interest in previously- enjoyed activities and hobbies is a common early symptom of dementia. It is often accompanied by listlessness and a lack of desire to partake in many activities.

We complete hundreds of familiar tasks every day, at home and in the workplace. People with dementia can have difficulty completing tasks that they previously did by rote. These include cooking a regular meal, budgeting their finances or putting on a load of washing.

People may start having difficulty judging distance, space, colour and contrast. In some areas of life this can be easily overcome but when driving a car or even being a pedestrian, the result can be fatal.

People with dementia can be resistant to change, no matter how small. They can become fearful and anxious. Sometimes this is a result of trying to adapt to change and not succeeding.

If you are searching for care and support for your loved one, do not rush into the first available option. Talk to CareAbout to check various options and facilities, particularly focusing on those who provide specialist dementia care.

An individual diagnosis of dementia has an impact on a network of people: friends, families and colleagues. Support and further information is available from the National Dementia Helpline on 1800 100 500 or at www.dementia.org.au

Speak to our Care Advisers today
CALL TODAY - 1300 721 855
Available now
The People’s Guide to Home Cares
Download this invaluable guide to give you confidence in your Home Care choices.